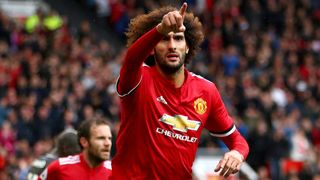 Manchester United manager Jose Mourinho insists he has always believed in Marouane Fellaini after the midfielder continued his fine start to the season with a double against Crystal Palace.

Mourinho's men cruised to a 4-0 victory at Old Trafford on Saturday, with the Belgium international scoring two close-range finishes either side of half-time.

Juan Mata and Romelu Lukaku scored United's other goals as they made it seven straight victories across all competitions, with Fellaini now on four goals for the campaign.

Fellaini's impact comes with key midfielder Paul Pogba out for the long-term and Mourinho was full of praise for the 29-year-old.

"I always trusted Marouane since day one," Mourinho said to BBC Sport.

"I try to give him confidence and show him how useful he is for the team.

"Fellaini played really well - but this is what he has been doing for a long time," Mourinho added to Sky Sports.

"He is confident, he is happy with his contribution to the team. The style of the team has the space for a player like him and he feels that, so I'm really happy."

Mourinho, who made five changes to his line-up after Wednesday's win over CSKA Moscow, added: "I could see the difference between Henrikh Mkhitaryan and Fellaini.

"Mkhitarayan played and Fellaini didn't in Russia. I had concerns. Palace had one week to prepare. We had to play in Russia and I had to make changes.

"The mentality allowed me to do that - everybody wants to play. The momentum is good and the players are happy and confident.

"Three points and a good performance. We rotated, we won and that's the most important thing."

Mourinho continued to MUTV: "I'm happy. I would change this 4-0 for four 1-0 victories but that is not possible!

"We played solid and strong from the beginning. We were always in control. Some little mistakes, [which] I think [are] typical from some tired players and playing against a team that is lacking confidence, but we did well."

Fellaini himself said: "We controlled the game. That's important and the confidence is there.

"In two weeks we have a big game against Liverpool. We have to go away with the national teams and come back fit."