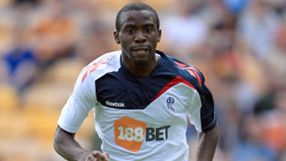 Muamba, 24, collapsed in an FA Cup quarter-final against Spurs in London on March 17 and his heart stopped working on its own for 78 minutes. He came out of hospital two weeks ago after a remarkable recovery.

"If Fabrice is fit and well for that then I think the game against Tottenham would be a great opportunity because of the events that took place at White Hart Lane," Bolton manager Owen Coyle told British media on Monday.

"It would give a chance for everybody to see how well he is doing and it would also give him a chance to thank both sets of fans, who were magnificent on the night, and the Tottenham players.

"The concern they [Tottenham players] showed for Fabrice that night was remarkable."

Tottenham, alongside Newcastle United and Chelsea who clash on Wednesday in London, are challenging for a fourth-placed finish which would lead to a Champions League qualifying round berth.

Spurs lie fourth on 62 points after 35 games, level with Newcastle, while Chelsea have a point less. The trio are also chasing third-placed Arsenal, on 66 points with only two games remaining, in the automatic Champions League spot.

Coyle's side are currently in 18th, level on 34 points with Queens Park Rangers who are outside the relegation zone thanks to a superior goal difference. Wigan Athletic and Aston Villa sit above them on 37 points.

Liverpool entertain Fulham on Tuesday before their FA Cup final meeting with Chelsea on Saturday. Stoke City are also in action against Everton at the same time.