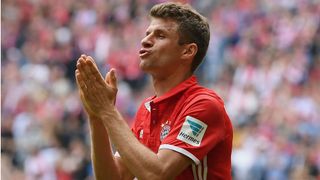 Thomas Muller is expecting Bayern Munich to make further moves in the transfer market as the Bundesliga champions attempt a fresh assault at domestic and European glory next season.

Bayern coasted to a fifth straight league title this term, but they were knocked out of the Champions League in the quarter-finals and beaten in the DFB-Pokal semis by Borussia Dortmund.

Carlo Ancelotti's squad has already been bolstered with the signing of Hoffenheim duo Niklas Sule and Sebastian Rudy, while Kingsley Coman joins on a permanent basis from Juventus.

However, with Philipp Lahm and Xabi Alonso retiring, Medhi Benatia joining Juve on a permanent deal, and Holger Badstuber ending his lengthy association with the club, Muller believes more arrivals are on the horizon at the Allianz Arena to help Bayern's pursuit of glory.

"It is to be expected that something will happen in the transfer market, like every season at Bayern Munich," Muller told Sport Bild.

"That is part of the business."

"My contract with Bayern runs until 2021. Something will have gone wrong if I have not won at least eight Bundesliga titles by then," he added.

"We never get any presents from our rivals, but we always want the title. We always demand a lot from ourselves. But that does not mean it has been a bad season if we do not achieve all our goals, like this year in the Champions League and the DFB Pokal.

"Of course, it is a sensational achievement if Darmstadt win the title, while it is quite normal for us to achieve that. But no-one has won five titles in a row before us."