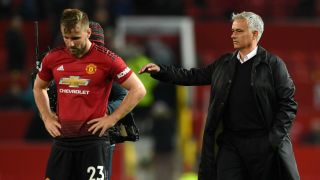 Nicky Butt believes despite Jose Mourinho's consistent team selections, Manchester United have suffered due to a lack of confidence in the squad.

In spite of coming off a win away to Juventus in the Champions League, Sunday's 3-1 loss to Manchester City leaves them 12 points off the Premier League leaders in eighth.

With a lack of confidence, according to Butt, inconsistent performances and results are expected.

"I think it's difficult when you have got players that aren't in form," he told Sky Sports. "It doesn't matter who you are or what team you manage, if the players are not on a high or confident they are not going to win too many games."

"At United at the minute, players are low on confidence. They came up against probably the best team in Europe (Manchester City) and got beaten."

With games against Southampton and Crystal Palace after the international break, the United academy manager believes they present a chance for morale to improve, heading into the busy Christmas schedule.

"They are steadily improving," Butt said. "The manager has recognised that and they are getting consistency in the team.

"The injury to Pogba can kill any team. They are not getting all the luck but that City game is gone now and hopefully they can push on to Christmas and get into a position where they are challenging in the top four."