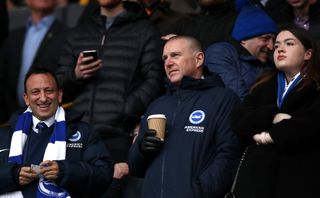 Brighton chief executive Paul Barber insists it is not just clubs fighting for Premier League survival who oppose the completion of the season at neutral venues.

The Seagulls boss remains opposed to finishing the 2019-20 campaign on anything other than a home-and-away basis, even though Premier League clubs are understood to have been told the use of eight to 10 neutral venues is the only way it can be done in a way which satisfies the Government and emergency services amid the coronavirus pandemic.

Barber added: “It is important over the next few days that we start to see a complete picture of everything we are being asked to agree to.

“We totally understand there are going to have to be compromises but what we can’t do is support something that will jeopardise our place in the Premier League and make it harder for us to stay in what is already a very tough competition.”

Brighton’s technical director Dan Ashworth said there is more to being at home than just playing in front of a supportive crowd.

Shadow sports minister Alison McGovern has called on the Government to step in to prevent clubs going bust as a result of the crisis.

“If we don’t take action now to support the base of the pyramid, the pyramid will collapse,” she said.

“The Government really does have to get involved or we risk a major crisis for sport two or three years down the line.”

The German Bundesliga will resume on May 16 after it received the green light from federal government on Wednesday.