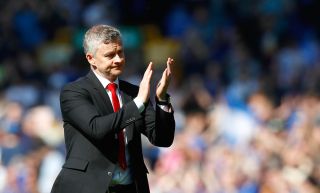 Ole Gunnar Solskjaer was non-committal when asked about Manchester United’s desire after admitting their 4-0 hammering at Everton was “difficult to describe because it is so bad.”

Solskjaer underlined his ambition to be successful at United and revealed some members of his side would be cast adrift in pursuit of re-establishing the club as contenders on domestic and European fronts.

For the time being, this was a sixth defeat in their last eight matches as goals from Richarlison, Gylfi Sigurdsson, Lucas Digne and Theo Walcott handed Everton a convincing and deserved win.

Solskjaer said: “We have got to apologise to the fans because they were absolutely fantastic and that performance is not good enough for a Man United team.

“All the way from me to the players, we know that we let the fans down, we let the club down. That performance is difficult to describe because it is so bad.

“We were beaten on all the things, all the ingredients you need, added to the talent. There is no place you can hide on the pitch.”

Asked whether his players were hurting after a heavy loss, which keeps them sixth in the Premier League, Solskjaer responded: “I don’t know.

“You have got to ask them. I have asked them, you’re not going to get the answer from me.”

However, he has demanded an improvement in their effort levels, harking back to his own playing days under Sir Alex Ferguson.

The Norwegian added: “If you want to play at this club, it has to mean more. I want my team to be the hardest working team in the league, that is what we were under Sir Alex, that’s what we’ve always been.

“No matter how much talent you have got, you run more than anyone. We know our fitness is nowhere near good enough.

“But we have to stick together as a team. You can’t change your whole squad. One step at a time. I am going to be successful here and there are players who won’t be part of that successful team but many of these do have it.”

United’s hopes of a top-four finish have been dented but Solskjaer insists now is not the time to dwell on the setback, with Manchester City and Chelsea their opponents at Old Trafford next week.

Solskjaer said: “City on the other side at Old Trafford on Wednesday, that is the biggest incentive that we can have.

Everton bounced back from defeat to Fulham last time out in scintillating style, to the understandable delight of manager Marco Silva.

He said: “It was a very good performance. We were the best team on the pitch since the first minute.

“We never gave them the chance to feel comfortable. We gave a quiet afternoon for our goalkeeper. We worked as a team since the first minute and scored nice goals also.”

The only low moment for Everton came early in the second half when Richarlison was withdrawn, the Brazilian clutching his left side as he limped off to be replaced by Walcott.

Silva added: “Let’s see how he will be. I didn’t speak with our medical staff. Painful in this moment.

“Tomorrow, in two days, we will know better. Hope nothing special but when Richarlison has to be out of one match, it is a really difficult position.”