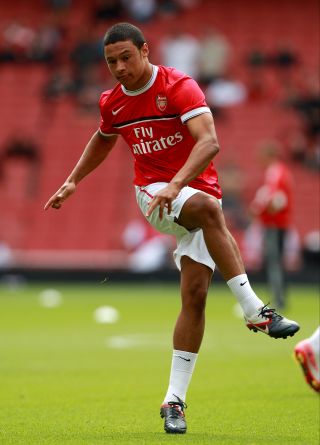 Arsenal splashed out an initial £12million to sign rising English star Alex Oxlade-Chamberlain from Southampton on this day in 2011.

After being handed his Gunners debut as a second-half substitute in the 8-2 thrashing at Manchester United, the 17-year-old midfielder made an instant impact in a first home appearance, scoring in the 3-1 Carling Cup win over Shrewsbury.

Oxlade-Chamberlain was also on target again the following week when he became Arsenal’s youngest scorer in the Champions League after an early goal against Olympiacos at the Emirates Stadium.

A call-up to the full England squad followed in May 2012. The combative midfielder went on to make the squad for the European Championships under Roy Hodgson and also travelled to the 2014 World Cup in Brazil.

Having missed the 2014 FA Cup final through a groin problem, Oxlade-Chamberlain came off the bench during the closing stages of the 2015 FA Cup final to set up Olivier Giroud for the last goal of a 4-0 victory over Aston Villa at Wembley.

But injuries have never been far away throughout Oxlade-Chamberlain’s career. In February 2016, a serious knee injury picked up against Barcelona and then a subsequent setback during rehabilitation saw the midfielder miss the rest of the campaign and also forced him out of contention for Euro 2016.

After again lifting the FA Cup following a 2-0 win over Chelsea, Oxlade-Chamberlain made his big career move on August 31 2017, choosing to leave the Gunners and sign a five-year contract with Liverpool in a deal worth around £35million.

The midfielder suffered another knee issue during the Champions League semi-final against Roma – one which would subsequently rule him out for the rest of the campaign and also end any hopes of making England’s 2018 World Cup squad.

Oxlade-Chamberlain finally returned to action for the Reds after 366 days out when he came on as a substitute against Huddersfield.

He would also feature in the squad for the 2019 Champions League victory over Tottenham, but did not play in Madrid.

After signing a contract extension through until 2024, Oxlade-Chamberlain enjoyed a full campaign for Liverpool as Jurgen Klopp’s side went on to claim the Premier League title for the first time – and so end a 30-year wait for the top-flight championship crown at Anfield.