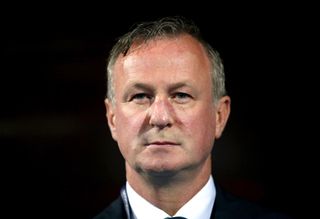 Northern Ireland manager Michael O’Neill wants to sow the seeds of doubt within Holland ahead of their crunch Euro 2020 qualifier in Rotterdam on Thursday night.

Both teams are talking up this match and the return fixture in Belfast next month as effectively being a play-off for a place in next summer’s finals.

Holland may start the night three points behind in Group C having played a game less, but they are clear favourites given the calibre of Ronald Koeman’s squad.

But following their failure to qualify for either Euro 2016 or the 2018 World Cup, another let-down would be unthinkable for this proud footballing nation – something O’Neill hopes to exploit.

“We’ll make it as difficult as we can for the Netherlands and by doing that, hopefully create a little bit of doubt,” he said.

“I think it would be a big thing for Holland if they went three tournaments without qualification, so there’s a lot of expectation of this group of players.

“They’re relatively young. I think Daley Blind is the most experienced player in the squad, so we have to create a situation where the game is difficult not only physically for Holland, but mentally as well.”

To make that happen, Northern Ireland must find a way to breach a defence anchored by the UEFA Player of the Year Virgil Van Dijk, with Juventus wonderkid Matthijs De Ligt stood alongside him.

That is an imposing task for any team, but particularly Northern Ireland, whose main weakness in the squad comes in attack.

Liam Boyce has scored six goals for League One Burton this season but Josh Magennis has only one for Hull and Kyle Lafferty is yet to register in his two appearances to date with Norwegian side Sarpsborg. Linfield youngster Shayne Lavery adds pace but is entirely unproven at this level.

“We‘re not coming into this game with strikers in a particularly rich vein of form,” O’Neill said.

“We need someone in terms of our front players who will rise to the occasion, but it might not be a striker who scores a goal that gives us an opportunity in the game.”

.@NorthernIreland are out to train at De Kuip #NEDNIR#GAWApic.twitter.com/Oc1ZlvpoH1— Ian Parker (@iparkysport) October 9, 2019

Northern Ireland captain Steven Davis knows Van Dijk well from their time together at Southampton, but knowing the 28-year-old’s game inside-out and knowing how to beat him are two different things.

“I am not sure I have seen too many weaknesses having trained with him,” the Rangers midfielder said.

“You obviously see the way he defends, he has the physical attributes to out-run most people and he is very strong as well.

“He tends to put the onus back on the attacking player and makes them make decisions and you don’t see him going to ground. He always stands up, that is why he is a clever defender.

“Usually it is the attacking player who makes the wrong decision and he reads the game well. He is a top player and I can only see him getting better.”

🎥 Four years ago we dared to dream and it became reality…💚— Northern Ireland (@NorthernIreland) October 8, 2019

O’Neill has no doubts about the class of Van Dijk and his team-mates, but saw little point in dwelling on it.

“We can’t get too focused on the names of the Dutch players, they’re just players at the end of the day,” he said.

Instead, the focus is on trying to finish a job that Northern Ireland started so impressively with victories home and away over Estonia and Belarus, giving themselves a chance in a group where few looked beyond Germany and Holland.

“When you’re a small nation like us, you have everything to gain in this situation and that’s the way we will approach the game tomorrow night,” O’Neill said.

“We’ve found a way to get results away from home and that’s what will be required again. Whether that’s from a counter-attack, a set-piece or from possession, we’re not bothered. We’ll take it any way it comes.”