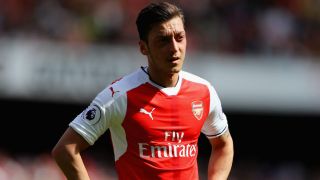 Mesut Ozil and Aaron Ramsey will be rested for Arsenal's home Europa League opener against Cologne.

Manager Arsene Wenger confirmed the midfield duo have been afforded a rest for Thursday's match at the Emirates Stadium after their international endeavours with Germany and Wales respectively.

Wenger did not confirm any of his other planned changes, although Petr Cech, Laurent Koscielny, Alexandre Lacazette, Danny Welbeck and Granit Xhaka all missed training on Wednesday along with Ozil and Ramsey, perhaps with Sunday's crucial away Premier League game against Chelsea in mind.

Francis Coquelin, meanwhile, is out for three weeks after sustaining a hamstring injury in the victory over Bournemouth last time out.

"Overall the injury situation is not too bad," Wenger said.

"On the injury front we have no big problems, a few players have some response to the fact they played two international games like Ozil and Ramsey, who are rested completely.

"Coquelin is out for three weeks. I don't give the team out today, I will give it out on Thursday."

Wenger was asked for an update on midfielder Jack Wilshere, who could make his first Arsenal appearance in over a year against Cologne.

"I believe that first of all [he has] to continue to work with the spirit he works and focus.

"I believe as well there was always a huge pressure on him to come back as quickly as possible and to expect a lot. If he can keep calm and focus on his job then he is on a good way.

"For me, in training, he is getting stronger every day. That is what we want from him. He has been injured at the start of the season from last season so he was a bit behind the other players but now he is getting better and better."

Olivier Giroud appeared in front of the media alongside Wenger and is expected to play, while Alexis Sanchez and Hector Bellerin trained with the squad as part of the club's pre-match preparations.