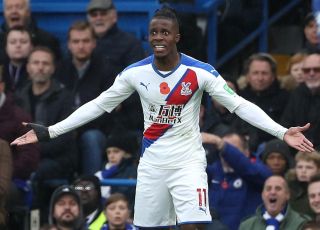 Palace forward Zaha, whose contract runs until 2023, failed to force a move away from Selhurst Park during the summer after handing in a transfer request.

The 27-year-old has been linked with Premier League rivals Everton, Arsenal and Chelsea in recent months and his future will once again come under the spotlight when the transfer window opens on New Year’s Day.

Eagles boss Hodgson admits any genuine bids for Zaha must be considered by Palace’s board but is certain the club do not wish to sell.

“Wilf is not for sale, so basically I don’t need assurances. We aren’t trying to sell Wilfried Zaha, we want to keep Wilfried Zaha,” said Hodgson.

“What assurance can people give? I have the assurance there is no one in the club that wants to sell Wilfried Zaha.

“But of course you never know where bids are going to come from and I suppose every time there is a serious bid for one of your players the board of directors needs to take it seriously.

“It’s certainly not something we’re looking for.”

Despite contending with a lengthy injury list, Palace end the year in the top half of the table after following up a Boxing Day win over West Ham with a draw at Southampton.

Hodgson has been left without seven first-team players after left-back Patrick Van Aanholt suffered a hamstring injury against the Hammers.

While retaining Zaha and other members of his squad is high on the 72-year-old’s list of priorities, he is also eager to recruit reinforcements during the next month.

“Everyone at the club is aware we need strengthening, we need some help in terms of our group of players because there are certain areas we don’t have the cover or competition we need,” he said.

“And I believe they (the board) will be trying to help put that right, too, but if you say, ‘have you got assurances?’

“Well, you cant get assurances unfortunately, you can only get people agreeing with you that this is what needs to be done and this should be the next step for us going forward.

“And then hope that it leads to some players coming through the door that you want, that will make your squad stronger, increase the competition and, most importantly, perhaps prevent us finding ourselves in the current situation.”

The Eagles begin 2020 against bottom club Norwich at Carrow Road.

Hodgson has been impressed with Daniel Farke’s Canaries and believes their style of play belies their lowly position and is superior to numerous higher-placed clubs.

“They’re a good team. They play some good football and they’ll be every bit as big a test as West Ham and Southampton have been for us – I don’t doubt that for one minute,” said Hodgson.

“We’ll have a lot of respect for Norwich and the way they play.

“They find themselves at the wrong end of the table but I have seen on many occasions watching them play that their passing quality and movement is better than many other teams above them in the league.”