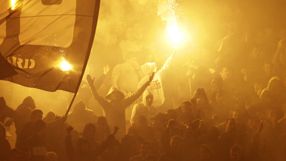 Closest rivals Red Star Belgrade lost ground after a 0-0 draw at Radnicki Kragujevac while bottom team Metalac Gornji Milanovac celebrated only their second win of the season with a 3-2 defeat of fellow strugglers Borac Cacak.

Partizan fell behind to a Petar Skuletic goal and hit the woodwork twice in the first half before Nemanja Tomic's equaliser on the hour turned the match their way.

Vojvodina had defender Daniel Mojsov sent off before Zvonimir Vukic converted a harshly awarded penalty and left back Vladimir Volkov made it 3-1 with a deflected effort after Miroslav Vulicevic was also shown a red card.

Former Yugoslavia midfielder Vukic completed the rout with an injury-time header after Volkov's cross from the left.

"We scored four second-half goals against a very difficult opponent, we are in good shape and this win was a result of excellent team work," Partizan coach Avram Grant told Serbia's Arenasport television.

"We started the game very slowly, we missed some chances while they defended well and then took the lead with an opportunist goal but we responded very well."

Red Star's slim hopes of winning their first league title since 2007 took another blow after the 1991 European Cup winners missed a hatful of chances at Kragujevac.

Striker Darko Lazovic and defender Dusko Tosic squandered gilt-edged opportunities for Red Star, who are away to Partizan in the second leg of their cup semi-final next week after winning the reverse fixture 2-0.

"I can have no complaints about the level of determination and the commitment the players showed as they did their best to win the match but it just wasn't meant to be," said Red Star coach Robert Prosinecki.

"It was a tough match but it left a lot to be desired and I think it needed a more adventurous approach from both teams to entertain the fans."