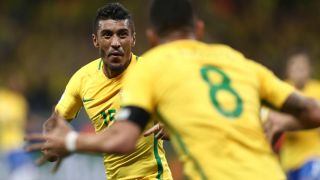 Paulinho was the unlikely inspiration behind Brazil's 4-1 victory over Uruguay after netting three times in Montevideo on Thursday.

Not known for his goalscoring exploits, Paulinho - based in China with champions Guangzhou Evergrande Taobao - cancelled out Edinson Cavani's ninth-minute opener with a stunning long-range effort.

Paulinho put Brazil 2-1 up seven minutes into the second half before sealing the country's eighth consecutive win in stoppage time, after Neymar had got in on the action with a sublime lob.

"I'd never dreamt of a hat-trick that would help the national squad to win a very important three points," Paulinho said.

"A difficult game, we knew how hard it would be here in Uruguay. Of course, we don't want it to happen so often, but we started with a 0-1, from the back, and we had the concentration, the calm to work with the ball and fight for a good result," the former Tottenham midfielder added.

"At the beginning of the match, as they [Uruguay] were working at home, we knew they would press us.

"We kept a bit more positioned, but I see that we had more ball possession than them throughout the 90 minutes. We managed to deal with it and fight for a good result.

"But I prefer to keep real about this, to keep working. And, when we're finally qualified, we will be able to celebrate."