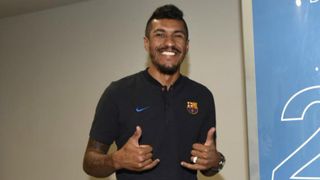 Brazil legend Pele has backed Paulinho to shock fans with his performances for new club Barcelona.

Bringing in the 29-year-old was a move questioned by the Catalan club's critics, but Pele believes he has plenty to offer at Camp Nou and warned against making snap judgements just because he had played in China.

"I think Barcelona are going through some changes but Paulinho will surprise a lot of people with his strength and character," Pele said to Marca.

"Before he went to Barcelona, he went to China, but he had a lot of other proposals – Germany, Italy.

"He went to China because today, unfortunately, and it's important to mention this, businessmen are the ones who decide where their players will go because it's they who sell the player to clubs.

"Sometimes you're thinking, 'Oh I wonder why he's playing there [China] rather than perhaps Spain, Argentina - he can't be very good' but it's because he didn't have too much choice.

"It was different for me because I decided I didn't want to leave Brazil, I just wanted to promote football."

Paulinho made his Barca debut in a brief substitute appearance against Deportivo Alaves prior to the international break and is now with the Brazil squad.