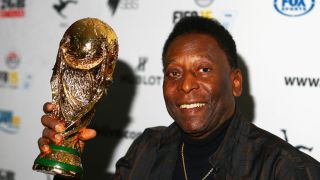 Pele has pulled out of attending an event in London, but there are conflicting reports regarding the health of the Brazilian icon.

The Football Writers' Association (FWA) released a statement on Friday indicating Pele - due to appear at an event on Sunday - had been hospitalised after collapsing.

Pele was due to attend an event at the Cambridge Union on Monday but has withdrawn from that visit too.

An adviser to Pele told Brazilian media the 77-year-old - who used a walking frame in an appearance at the 2018 Carioca Football Championship earlier this week - pulled out of the trip to the United Kingdom to avoid fatigue.

The FWA statement read: "In the early hours of Thursday morning, Pele collapsed and was taken to hospital in Brazil where he has undergone a series of tests, which appear to point to severe exhaustion.

"He remains on fluids while doctors monitor his recovery. Thankfully, there is no suggestion of anything more serious than exhaustion and everybody at the Football Writers' Association wishes Pele a swift and full recovery."

Pele is regarded as one of the finest players to play the sport.