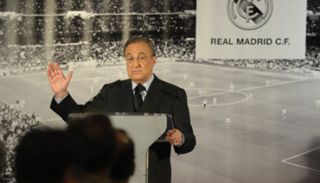 Perez, who is up for reelection next month, announced on Monday Mourinho would be leaving at the end of the season, three years before his contract expires.

The world's richest club by income finished their latest campaign without a major title, surrendering their La Liga crown to arch rivals Barcelona, losing in the semi-finals of the Champions League for the third season in a row and falling 2-1 to Atletico Madrid in last week's King's Cup final.

Portuguese Mourinho was the eighth coach Perez has hired during two stints as president - from 2000 to 2005 and from 2009 to the present - during which time around 700 million euros of the club's money has been spent on players.

A move had been made for Paris St Germain's Italian coach Carlo Ancelotti, who has told the French side he wants to leave, but PSG had so far blocked the deal and other candidates were being considered, a grim-faced Perez told reporters at a news conference at the Bernabeu stadium.

Perez lured Mourinho from Inter Milan in 2010 to deliver the 10th European title Real have been chasing since 2002 and end the domestic and continental dominance of arch rivals Barcelona.

However, after a three-year stint marked by division, controversy and conflict Mourinho's record is one La Liga title and one King's Cup, a meagre haul for a club as wealthy and ambitious as Real.

Perez's coaching appointments have also proved immensely costly to the club, according to reports in local media.

Real paid Villarreal 4 million euros in 2009 to release Manuel Pellegrini, who was sacked a year later, and 16 million euros to Inter Milan for Mourinho, the reports said.

Perez, 66, announced on Monday that the next election for the presidency would be held on June 16 and he would be standing for another term.

Real are one of four Spanish top-flight clubs owned by their members, or socios, alongside Barca, Athletic Bilbao and Pamplona-based Osasuna.

Despite Perez's apparent inability to appoint an effective coach, or at least give those he hires sufficient time to deliver, his position is unlikely to be challenged and without other candidates he will automatically be reelected for another four years.

In September, Perez won the backing of members for statute changes that make it harder for outsiders to seize control.

Presidential candidates have to have been club members for at least 20 years, up from 10 years previously, and must also personally provide a bank guarantee worth 15 percent of the club's budget - around 75 million euros - rather than relying on any third party.

"Eliminating criticism does not mean being in the right," columnist Juanma Trueba wrote in As sports daily on Tuesday.

"In the history of Real Madrid the club has only finished the season without a [major] trophy in football or basketball on seven occasions," he added.

"Four have been with Florentino in the presidency and it will be five of eight if the basketball team does not win the league this year."