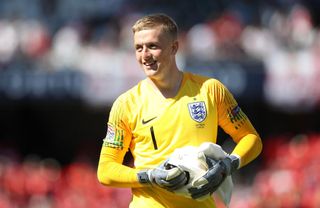 Jordan Pickford relishes the challenge of trying to hold on to the England No.1 spot and believes growing competition will push him to another level.

The Everton goalkeeper has repaid Gareth Southgate’s faith since becoming first choice for the World Cup, where his penalty shoot-out heroics against Colombia were complemented by a man-of-the-match display in the quarter-final against Sweden.

Pickford’s ability on the ball was key to his getting the starting role ahead of Jack Butland – a player who was omitted for the forthcoming Euro 2020 qualifiers against Bulgaria and Kosovo following a difficult start to the season with Stoke.

Tom Heaton and Nick Pope got the nod instead this time, but Angus Gunn, Dean Henderson and Aaron Ramsdale are knocking at the door.

“I think it’s great for the GK union that there is that much competition,” Pickford said. “It means people will thrive and become better goalkeepers.

“It means you have to be performing for your club first and training hard, making yourself the best you can be at Everton for me, then England should take care of itself.

“The more competition the better. It will make me better as well. I think it’s six goalkeepers (in the Premier League), which is quality for us.”

Ben Foster takes the number of starting English goalkeepers in the Premier League to seven but is now retired from international duty, while Southgate is keeping tabs on Newcastle’s Freddie Woodman during his loan spell at Swansea.

The England manager’s options are keeping Pickford on his toes, so too the way he is willing to drop big names for the purpose of progress.

“You just look at the quality on the training pitch,” the goalkeeper said. “The quality is throughout the team and we all know what we want to achieve as a team.

“We all strive to be better on the pitch and as a squad it is always evolving.

“We have new lads in this week and everyone is fighting with the competition.

“That is your first focus, then you have to do well when you come here. That is what everyone seems to do in training, the standard is unbelievable.”

Pickford considers himself among the top performers in the squad and is understandably confident after a promising start to the season with Marco Silva’s Toffees.

Intensity from the off. The #ThreeLions are getting set for Bulgaria and Kosovo 💪 pic.twitter.com/5ECHxGngbn— England (@England) September 3, 2019

“I’m in good form and feel I’ve kicked on,” he said. “I feel strong and have been getting clean sheets.

“The main thing is winning and as long as we win it’s okay to concede now and again.

“We’ve started the season well and I’m making good saves and my distribution has been good as well.”

It is an encouraging start to a campaign that could end in memorable fashion.

Having reached the World Cup semi-finals and finished third in the inaugural Nations League, England are aiming for Euro 2020 success in a tournament that will start and end on home soil.

“It’s still a long way to go and we have to qualify first,” Pickford said. “We’ll be looking to get as many wins (as we can), starting with the two in front of us, but knowing that is on the other side next year is a great ambition for us to make it there.

“I haven’t taken too much thought into it as it is a year away.

“I’ve just got to keep playing well for Everton and then making sure I’m on my A-game if I play for England.

“When we get closer we’ll visualise it more, but at the moment we’re focused on qualifying.”