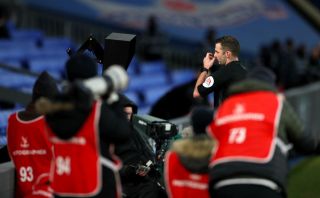 Wayne Rooney helped Derby cause an upset at Crystal Palace to reach the FA Cup fourth round on an afternoon where the pitchside monitor was used for the first time in England.

Referee Michael Oliver watched a replay of an incident between home captain Luka Milivojevic and Tom Huddlestone and overruled his original decision of a yellow card to send off the Eagles skipper midway through the second half.

One-time Palace loanee Chris Martin scored the only goal against his former club and it proved enough to dump Roy Hodgson’s side out of the competition following a 1-0 defeat at Selhurst Park.

The Premier League club, albeit not helped by a growing injury list, only made five changes to the team which fought back to draw at Norwich on New Year’s Day.

One of those was academy graduate Brandon Pierrick – fresh from his debut off the bench at Carrow Road – and he needed little time to make an impact.

The forward tested Kelle Roos after four minutes following some neat skill and then won a free-kick, which Milivojevic curled over.

It was not to be a sign of things to come as Derby youngster Louie Sibley curled wide in the 19th minute after Rooney had won the ball by the touchline.

Rams’ player-coach was slowly starting to dictate with a couple of trademark passes that sent Scott Malone and Sibley through on goal, but neither could make the most of the opportunities.

The Sky Bet Championship club were growing in confidence though, and took the lead in the 32nd minute.

Highly-rated right-back Jayden Bogle worked some space out wide against Jairo Riedewald and crossed in for Martin to flick home at the back post.

Boss Hodgson saw his problems increase six minutes before half-time when Max Meyer was forced off with a knock and although the Eagles did finish the first 45 strongly, they remained behind at the break.

Pierrick made another lively start following the restart and set up James McCarthy, but Roos was equal to the effort.

The hosts started the second period brightly and Connor Wickham fired over before Jordan Ayew had a shot deflected over by Curtis Davies.

Rooney remained an influential figure for Derby and he was involved in a move which should have put the game to bed for the visitors in the 61st minute.

Tom Lawrence crossed in for Bogle, but he directed his header wide of Hennessey’s goal.

Palace’s cause was not helped two minutes later when Milivojevic clashed with Huddlestone and not only kicked out, but then moved his head towards the Derby midfielder.

Referee Oliver originally showed a yellow card to the pair before VAR had a look and then it was left to the man in the middle.

Oliver went over to the pitchside monitor and after watching the incident decided to send off Milivojevic, although it came five minutes after the initial incident.

Hodgson lost Riedewald to an injury not long after to add to Palace’s problems before Derby substitute Martyn Waghorn hit the post in stoppage time.

It would not prove costly for the Rams and boss Phillip Cocu as they secured a third straight win to dump the Eagles out of the FA Cup.