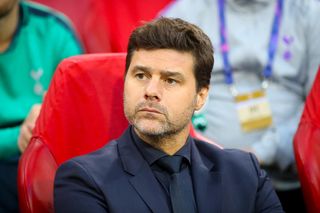 Tottenham manager Mauricio Pochettino says it would be “embarrassing” to allow talk about his future to dominate the build-up to the Champions League final.

Pochettino, who was appointed into the Spurs hotseat five years ago on Monday, has seen his position come under question after he hinted he might leave if his side beat Liverpool in Madrid on Saturday.

He has been linked with the vacant managerial job at Juventus following the exit of Massimiliano Allegri, and was asked straight out at Monday’s press conference whether he will move to Serie A next season, while he also floated the possibility of taking a sabbatical at the end of the season.

🎙️ Mauricio: "We have ahead of us one of the best games you can play in. To be involved in the @ChampionsLeague final is a privilege and we are enjoying every single day. It's a massive achievement for this Club." #UCLfinal ⚪️ #COYSpic.twitter.com/Se6Y1WNQth— Tottenham Hotspur (@SpursOfficial) May 27, 2019

Whatever happens in the Spanish capital, Pochettino will sit down with Tottenham chairman Daniel Levy to discuss his future and which direction the club takes next.

But he is not willing to discuss anything until after the match with Liverpool.

“Today no one is more important than the game we have ahead,” he said.

“Tottenham deserve for us to be all 200 per cent focused on preparing in the best way for the game.

“We can make history, we can write our history and provide our fans and people and family with the best happiness in football.

“Today, to think about individual things is a little bit embarrassing and a shame.

“I am not important. What happens in the future with me – I think we have bigger things ahead to think about (referring to the final).

“To play the final of the Champions League, to play with all the emotions that this competition generates, I am nothing to worry about.

“I am not more important than the Champions League or the possibility to win a trophy, or the club.

“The rumours are out there. You ask about me but today the focus is 200 per cent on the final. Rumours are rumours and are there.

“After the final we will have time to talk. Today my commitment to Tottenham is 200 per cent.”

Pochettino is able to command interest from Juventus, Manchester United and Real Madrid because of the work he has done at Spurs.

Taking charge five years ago, he has transformed them into Champions League regulars and Premier League contenders.

🗓️ 👔 On this day in 2014, Mauricio was appointed as our new head coach. Five years later he is preparing to lead us into our first UEFA Champions League final. 🙌

To get to the biggest match in club football, Pochettino says, is a “massive achievement”.

“I was thinking today it was my best period here, today I signed a contract five years ago and this period is amazing for us,” he said.

“It is a privilege to play in the Champions League final on Saturday and we are so lucky to have three weeks to prepare because we are enjoying every single day.

“I think when you look back all that transformation from the club, I think it was one of the areas to attack and improve.

“When you look back the amazing improvement of the club, from facilities and the mentality and the results to be here in the Champions League final.

“It is a massive, massive achievement for this club, working and developing a project that is completely different to other clubs who can achieve to be in a Champions League final.”

Spurs will not be favourites in the Spanish capital as they finished 26 points behind Liverpool in the Premier League table and lost both games 2-1.

The Argentinian insists nothing that has gone before will matter on Saturday.

“It is going to be a completely different game,” he said. “We cannot prepare thinking about a few months ago.

“When you play Premier League, or Carabao Cup or FA Cup the circumstances are completely different.

“That is why our focus is completely on ourselves. It is a team we know well and they know us well.

“But we didn’t prepare thinking of the game we played at Wembley or Anfield. It is Madrid. It would be a massive mistake to prepare like we played in the past.”