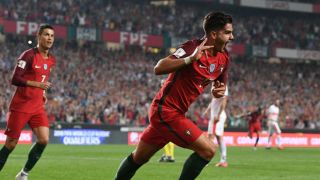 Switzerland headed into the final round of matches in Group B boasting a 100 per cent record but must now tackle a play-off after Fernando Santos' European champions matched the scoreline they found themselves on the receiving end of in Basle last September.

Cheered on by a raucous crowd knowing nothing other than a win would do at Estadio da Luz, Portugal were kept in check by a composed and disciplined Swiss showing until Johan Djourou put into his own goal in the 41st minute.

Pop superstar Madonna was among the home supporters looking for Cristiano Ronaldo to inspire a famous victory but it was playmaker Bernardo Silva who truly got Portugal into the groove.

That the Manchester City playmaker has not been an automatic choice at club level since switching to the Premier League was scarcely evident as he performed at the heart of Portugal's brightest moments, including Andre Silva's qualification-sealing second.

Santos' side made much of the early running and Andre Silva's deflected effort forced Yann Sommer into a sharp sixth-minute save at his near post.

However, the hosts' final ball was a source of understandable frustration and, after Eliseu escaped censure for an untidy challenge on Switzerland striker Haris Seferovic in the area, Portugal needed their talisman to help bring about a clear opening after the half-hour.

Ronaldo embarked on a slaloming run across the edge of the Switzerland box and there was fury when referee Cuneyt Cakir remained unmoved as he went to ground under increasingly desperate challenges.

Bernardo Silva was alert, as players around him stopped, and gathered the loose ball to draw a fine stop from Sommer, but the Borussia Monchengladbach man was culpable as the European champions took a fortuitous lead four minutes before half-time.

Eliseu clipped a low cross into a dangerous area at the near post where Joao Mario and Sommer lunged towards the ball. The goalkeeper pushed it onto Djourou, who could do little about the own goal.

Portugal seemed intent on settling the issue during the opening exchanges of the second half and Djourou hurled himself in the way of a rasping Ronaldo drive from 25 yards.

Bernardo Silva scampered in from the left to give the Real Madrid hero a clearer opening in the 55th minute but technique uncharacteristically deserted him and he lifted a left-footed effort harmlessly over.

It mattered little as Andre Silva smuggled home from close range two minutes later, namesake Bernardo again to the fore, cleverly exchanging passes with Joao Mario to befuddle the Switzerland backline and impishly leaving a goal and qualification on a plate.

Seldom seen as an attacking force during the opening hour, Switzerland sprung forward in a belated attempt to salvage a task that had slipped abruptly from their grasp.

Xherdan Shaqiri drove at a retreating Portugal backline and his thudding shot was almost touched in by an alert Seferovic in the 67th minute.

It was not to be for Vladimir Petkovic's men, who will at least take their previously unblemished run into the play-offs as seeds.

For Ronaldo, who botched a late one-on-one opportunity, it means one more guaranteed shot at football's greatest prize – a position a certain Argentinian rival would dearly love to have secured.