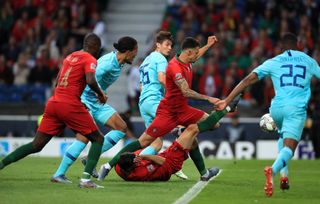 Portugal and Holland will be the biggest names relying on play-offs for Euro 2020 as things stand after the second qualifier window.

The Nations League finalists are currently outside the automatic qualifying places in their Euro 2020 groups where games were being played while the duo were busy contesting UEFA’s latest trophy.

Wales and Scotland are also on course for next March’s deciders, though England, Northern Ireland and the Republic of Ireland have made strong enough starts to occupy automatic qualifying spots at this stage.

Here, Press Association Sport looks at the state of play.

The play-offs are determined by the Nations League standings, with the four group winners from each league having the fall-back of a play-off spot should they not qualify automatically.

Any Nations League group winners who also finish in the top two of their qualifying group, thereby making it directly to Euro 2020, will be replaced in the play-off bracket by the next highest-ranked team from their Nations League tier – UEFA having ranked all 55 teams in that competition in order by their final performance.

If any league does not have four teams to compete, the numbers will be made up by teams from another league. For example, if nine of the 12 teams from League A qualify automatically, the highest-ranked team to miss out on the League B play-offs will instead compete in those for League A.

Each league’s play-offs are seeded and the semi-finals are single-leg matches, hosted by the team with the higher Nations League ranking.

With the four group winners having competed in the Nations League finals in the recent international window, other teams were able to make up ground in qualifying and only England currently top their group.

That means Portugal and Holland would meet in the play-offs as it stands, with Croatia inheriting the spot vacated by England and the resulting trip to Switzerland. The teams’ games in hand should ensure that picture changes significantly before March.

Of the other teams who competed in the top tier of the Nations League, Belgium, France, Spain, Italy, Poland and Germany are currently in automatic qualifying positions, with only Iceland missing out as it stands.

Three of the four League B champions – Ukraine, Denmark and Sweden – currently occupy automatic qualifying positions with only Bosnia and Herzegovina on course to take up their play-off spot.

Austria and Wales are the only other League B teams currently outside the qualifying positions and would meet in Vienna if the situation remains unchanged.

With no League B team to occupy the final spot, Romania would step up to face Bosnia – they are the highest-ranked League C team outside of the qualifying and play-off positions, and Iceland cannot move down into a play-off section containing a Nations League group winner.

Scotland’s dismal start in Group I, which cost manager Alex McLeish his job, means his successor Steve Clarke may be thankful for their Nations League safety net.

As the highest-ranked of the four League C group winners, they are guaranteed a home play-off should they not qualify automatically.

As it stands, they would face Bulgaria – who would take up the final spot with Finland in an automatic qualifying position in Group J.

Norway would host Serbia in the other semi-final and with Israel and Hungary both in qualifying positions, Romania are first in line to step up to the League B play-offs.

The situation in League D is straightforward – the group winners are all outside the automatic qualifying places and on course to take up their play-off spots as scheduled, with Georgia hosting Belarus and Macedonia at home to Kosovo.