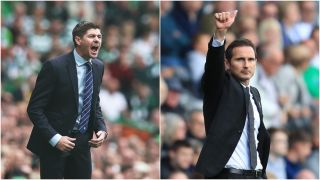 Wayne Rooney does not believe it will be long before Steven Gerrard and Frank Lampard are being lined up for Premier League managerial roles.

Gerrard and Lampard have each taken their first steps in management this season, with Liverpool legend Gerrard moving on from his role with their academy to assume charge at Rangers, while Lampard has taken the reins at Derby County.

Rooney has designs on management himself and, in an interview with the Mail on Sunday, the 32-year-old reiterated his desire to move to the dugout when his playing days are over.

The former Manchester United, Everton and England striker, whose career has been rejuvenated by a move to MLS side DC United, said: "Football is what I know. It is what I have done my whole life.

"I just think it a shame when you see players who have had careers like mine, when they have been footballers from a young age, you see them finish and they just walk away from the game.

"A good way to start out as a manager is to, first of all, be honest with your players, but also know your players and know how to manage them.

"I think man-management is more important sometimes than the training you do."

Hailing ex-Premier League rivals and England team-mates Gerrard and Lampard, he added: "Steven Gerrard and Frank Lampard have moved into management and I think it is brilliant for those two.

"It is the right time for young English managers to step forward. I am sure in two or three years there will be clubs in the Premier League coming to try to snatch them away."