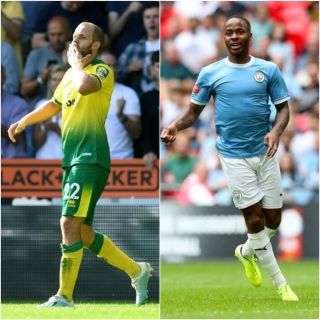 Premier League action returns this weekend after the international break.

All top-flight clubs will complete their fifth round of fixtures and here the PA news agency takes a look some of the main talking points.

Red machine to march on

Liverpool and Newcastle have served up some humdingers down the years. Who can forget those two 4-3 wins for the Reds at Anfield in successive seasons in the mid-90s? But, despite Newcastle’s win at Tottenham in their previous away game, few expect anything other than a fifth straight Premier League win for manager of the month Jurgen Klopp’s side as they bid to maintain, or extend, their two-point lead over champions Manchester City at the top of the table. Steve Bruce’s side are currently 14th, but should find themselves closer to the bottom three after Saturday’s lunch-time kick-off.

Pukki versus Sterling at Carrow Road

City could find themselves five points adrift of Liverpool when they kick-off at tea-time against newly-promoted Norwich at Carrow Road. Finland striker Teemu Pukki has picked up where he left off for Norwich last season by scoring six goals in seven games for club and country, but the Canaries have won only one of their previous 13 games against the Premier League title-holders. Pep Guardiola’s side also have a red-hot goalscorer of their own, with Raheem Sterling scoring in all bar one of his games for City and England, including a hat-trick in last month’s 5-0 win at West Ham.

Watford have reappointed Quique Sanchez Flores as head coach and he will take charge of his first match since returning to Vicarage Road against Arsenal on Sunday. The Spaniard, who spent one season at the club before leaving at the end of the 2015/16 campaign, faces a tough task. The Hornets are bottom after taking one point from their first four games and face Arsenal and Manchester City in their next two matches. The Gunners will be buoyed by their second-half fightback against Tottenham, which earned them a 2-2 draw before the international break.

Can Spurs re-boot for London derby?

Tottenham have yet to get going this season. After their opening-day win against Aston Villa, draws against Manchester City and Arsenal have sandwiched a surprise home defeat to Newcastle. Mauricio Pochettino, who held a meeting with his players this week to help them “refocus”, could include Ryan Sessegnon in his squad for the first time. The £25million summer signing  is fit again after a hamstring injury. Palace, fourth in the table, will look to maintain their canny knack of bringing down top-six sides following last month’s win at Old Trafford.

Manchester United will come under close scrutiny against Leicester at Old Trafford on Saturday when they will be under pressure to prove their opening-day win against Chelsea was not a false dawn. United have shown little sign of progress since and a vibrant Leicester have all the tools necessary to make it another uncomfortable afternoon for Ole Gunnar Solskjaer’s side. Harry Maguire’s head-to-head with former team-mate Jamie Vardy will be an intriguing sideshow as United bid to put their recent home defeat to Crystal Palace behind them.