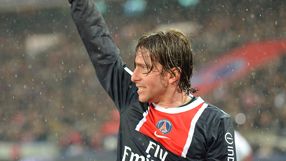 Paris Saint-Germain are ready to go to "war" against Montpellier as the two clubs are getting ready for the Ligue 1 title sprint.

"We are three points behind. It's going to be war against Montpellier and we are going to fight until the end," full-back Maxwell told reporters.

"The truth is that we are going to be after them and will not let anything go."

PSG, who travel to AJ Auxerre, have 63 points with seven matches left, to Montpellier's 66.

AJ Auxerre coach Jean-Guy Wallemme and his squad visited the city's prison on Friday in order to boost their team spirit ahead of their game against PSG.

"We are privileged, free men," Wallemme told sports daily L'Equipe. They were greetd by jeers, followed by encouragements. "Go AJA, go beat PSG," some inmates said, according to L'Equipe.

Auxerre are bottom of the table, six points from safety.

Montpellier will have to dig deeper than usual if they are to bag three points at Lorient in their third game in a week, according to Morocco midfielder Younes Belhanda.

"We will need to dig deep physically and mentally because it's our third game in a week and it will be the toughest," Belhanda, possibly the best Ligue 1 player this season, told a news conference.

Montpellier, who won their game in hand 3-1 at Olympique Marseille on Wednesday, have won their last three league games.

Lille will have to make do with the absence of the injured Florent Balmont when they take on AC Ajaccio, the club said on their website.

The holding midfielder picked up a thigh injury during training earlier this week.

Lille, who are also without the suspended Mathieu Debuchy, Benoit Pedretti and Tulio de Melo, are third on 56 points.