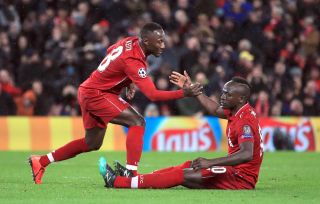 Liverpool forward Sadio Mane believes Naby Keita will become a big star at Anfield as the Guinea midfielder has proved before he is a slow-burner at a new club.

The pair struck up a close relationship – Mane describes him as a “brother” – in the brief time they were together at Red Bull Salzburg in 2014 before the Senegal international moved to Southampton.

Mane has since followed Keita’s career closely and feels there is a lot more to come from the £52.75million signing, who has had an indifferent start to his Liverpool career.

“I knew him from a long time ago, from the first time he came to Salzburg and he was the same,” Mane told Press Association Sport.

“At the beginning at Salzburg it was very tough for him but he never stopped working hard.

“He was not playing for a while and he was really positive and after he was the star of the team.

Keita has scored in back-to-back matches, after 27 previous appearances for the Reds without a goal, and his all-round performances have improved after a stop-start introduction to English football.

“To be honest I think we have more to see from him. At the moment it is going well for him and everyone is very happy for him,” added Mane.

“The real Naby is coming still. He played well the last two games. I know him very well and there is more to come.

“I think goals always give him more confidence. He scored two goals and I think it boosts his confidence.”

Having Mane at the club has helped Keita’s settling-in period but the Senegal international insists the player has worked hard to integrate himself.

“I just talked to him to do what I can but Naby is a big boy so he knows how football can work and sometimes not,” said the forward.

“I’m trying to help him and everyone in the team and the coach as well.

“It is not easy to move from Germany to change club, especially as the league is not the same. It is part of the things you have to deal with and he is working hard every single day.

“Off the pitch I am very happy for him, he’s very relaxed.”