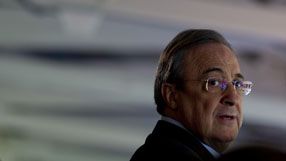 The two Spanish internationals backed Perez and Mourinho with a separate statement on the club's website, denying the newspaper's story of a "him or us" ultimatum.

In an unusual move for the construction magnate, Perez called a news conference at the Bernabeu stadium to address the report, which he said was "simply a lie" and was "designed to destabilise the club".

Marca's morning edition said, without naming the source of their information, that players were threatening to leave if Mourinho continued.

The alleged ultimatum was given at a meal with Perez and director general Jose Angel Sanchez this week, according to the paper.

"As you can see I have changed my normal practice of not commenting on the club's day-to-day affairs," a grim-faced Perez told reporters.

"It is completely false that at the meal with the captains we had on Tuesday any kind of ultimatum was given regarding the coach or anything of the kind," he added.

"As is normal for the month of January, we had a meal including the two captains, the director general and myself with the sole aim of agreeing the bonuses for the various competitions we are contesting this season.

"I believe that there are ethical limits that have to be respected, also for those who do not support our project."

Taking questions after his initial statement, Perez said he had not spoken to Mourinho about the Marca article and added that the newspaper had not contacted any of the four people present at the meal to check the details of the story.

Marca continued to hold their morning story as the leading headline on their webpage in the afternoon, also posted a video response by the paper's editor Oscar Campillo.

"Marca do not want to destabilise Real Madrid," Campillo said. "We are not looking to change the president, the coach or anyone.

"We did not say the players had presented an ultimatum. We said the players said 'President, we are more united than ever, but the coach's methods and the way he conducts himself unsettles and distracts us.

"'If he continues after this season, some players will ask to leave Real Madrid.' We didn't say it was a case of blackmail."

Casillas and Ramos are two players who, according to local media, have had their differences with Mourinho as the side have struggled to replicate last season's title-winning form.

"In the meeting held on Tuesday with the club's president and director general there was no ultimatum from us regarding our coach," the players' statement said.

"As squad captains and members of an excellent group of people and professionals we categorically reject the use of our names or any of the rest of our squad in support of any such information that we label in its entirety as false.

"We want to show our support for our coach, Jose Mourinho, for whom we have the greatest respect.

"Finally, we wish to convey to all Real Madrid club