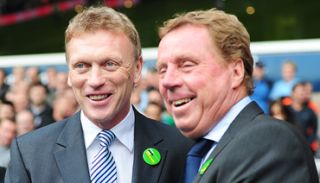 Moyes, who will leave Everton after 11 years to take over the Old Trafford hot seat at the end of the season, was given the nod ahead of candidates such as Real Madrid's former Chelsea manager Jose Mourinho and Borussia Dortmund's Jurgen Klopp.

Despite Moyes never having won any silverware and his lack of European experience, Redknapp said the 50-year-old Scot was the perfect candidate for one of the most prestigious jobs in English football.

"It's a great job for David and I couldn't be more pleased for him," former Tottenham Hotspur manager Redknapp told a news conference on Friday.

"He is a fantastic boy and a top manager and I think he will do a great job at Manchester United.

"He's the perfect choice and it's good too for the game in this country that they have taken a British coach and they have given him a chance and not gone abroad and pulled some one in.

"They have taken some one who has done his apprenticeship and managed at lower levels and come through the system and it gives great hope to other young British managers who are working in the lower divisions.

"There are some real talented lads out there working in all divisions and they just need the opportunity to manage higher.

"Moyes has come through from the bottom, did a fantastic job at Everton and now he's got the plumb job."

Before taking over at Everton in 2002, former Celtic defender Moyes managed Preston North End, taking them to the play-offs for the Premier League.