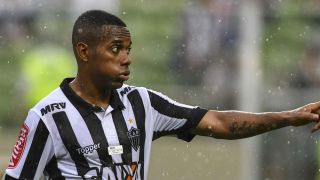 Robinho has reached an agreement to join Sivasspor, the Turkish Super Lig side have announced.

The former Real Madrid and Manchester City forward was released by Atletico Mineiro when his contract expired at the end of last month.

A statement on Sivasspor's official website read: "The Brazilian striker Robinho, whom we have been seeing for a long time [and] who we have agreed to [sign] in principle, will be in Sivas tomorrow [Tuesday].

"After the final negotiations, he will sign a formal contract with us."

The length of Robinho's intended deal with Sivasspor, who are eighth in the table after winning promotion to the top flight as TFF First League champions last season, has not been disclosed.

In December, a court in Milan sentenced Robinho to nine years in prison for an alleged incident of group sexual assault on a 22-year-old woman involving five other men in January 2013.

The 33-year-old, who played for AC Milan between 2010 and 2014, entered a not-guilty plea and denies the charges, with the case likely to be the subject of a lengthy legal process in Italy.