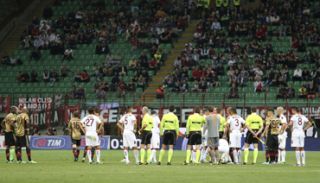 The match was stopped for two minutes and a warning was issued over the public address system.

The tribunal did not say which three players were the victims but Milan coach Massimiliano Allegri said Italy striker Mario Balotelli was one.

Milan fielded five black players in their starting line-up although Sulley Muntari was sent off before half-time.

Roma issued a statement condemning the behaviour of the supporters.

"AS Roma condemn all form of racist abuse," the club said. "This type of behaviour on the part of any supporters, including our own, is totally unacceptable.

"We are committed to confront the matter with determination to eliminate the problem from sport and promote respect to everyone."

Sepp Blatter, president of world football's ruling body FIFA, said on Twitter he was appalled at the incident.

"Tackling this issue is complex but we're committed to action, not just words," he said.

Milan chief executive Adriano Galliani said: "This jeering has to stop, it's really a shameful thing.

"Violence in stadiums has been drastically reduced and I expect us to do the same to stop the minority of racists. We need to end this now."