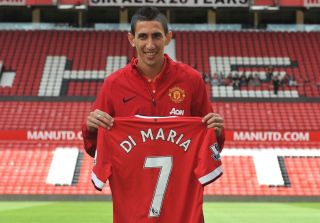 Di Maria sealed a British transfer record £59.7 million move to Old Trafford on Tuesday after falling down the pecking order in Carlo Ancelotti's side and has been given Ronaldo's old number seven jersey.

Ronaldo, who spent six trophy-laden seasons with United, believes the move is exactly what the Argentine needs and is confident he can help United turn around their poor start to the Premier League season.

"It's good for him [Angel di Maria]. Manchester [United] is one of the best clubs in the world, will be good for him and I wish the best of luck for him," he said.

"I wish the best of luck for him. He deserves it, he's a fantastic player.

"He's going to do well in Manchester United and I said to him, 'Number 7 is a big responsibility', but I think he will be able to take that shirt because he's a fantastic player."