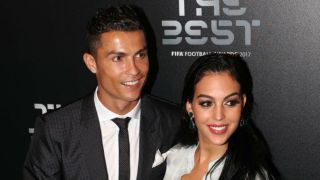 The wait is over. Cristiano Ronaldo and his partner Georgina Rodriguez have revealed the name of their daughter, who due to be born next month.

In a live broadcast via Instagram, Real Madrid superstar Ronaldo and girlfriend Rodriguez announced their baby will be named Alana Martina.

"I chose the first name and Gio the second," said the 32-year-old, who later marked the occasion with a trademark shout of "Si!".

It is a change in tact from Ronaldo, who was largely secretive about the birth of his twins in June.

Alana Martina will be the Portuguese's fourth child but his first with Rodriguez.