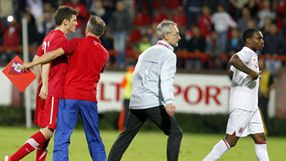 England won the game 1-0 in the provincial city of Krusevac in southern Serbia to secure a place in next year's finals in Israel 2-0 on aggregate but fighting broke out between players and officials after the game ended.

Rose, who was shown a red card after the final whistle for kicking the ball away, said he was racially abused throughout the evening with the insults beginning before the match even began.

"When we started the warm-up, the monkey chants started straight away while we were warming up. I asked the lads if they could hear it and they said they could," he said.

"The chanting in the first half was nowhere near as bad as the second half.

"During the second half two stones hit me in the head when I went to get the ball for a throw-in. Every time I touched the ball they were doing the monkey chanting again."

The English FA confirmed it had reported a number of racist incidents to the UEFA delegate with a formal protest also being lodged with European football's governing body.

Serbia have long had problems with racism and football violence. They were forced to play a Euro 2012 qualifier behind closed doors after fans rioted at an abandoned Italy game in Genoa in 2010.

According to the Serbian B92 website, Serbia coach Aleksandar Jankovic, when asked by English reporters if he felt he should apologise for the fracas, replied: "Apologise for what? It takes two for a brawl."

Jankovic is also head coach of Red Star Belgrade and this was his final game as Serbia's Under-21 coach.

Rose said he lost focus because of the racist chants.

"After 60 minutes my mind wasn't really on the game. I was just so angry and it was just so hard to concentrate, and I could have cost the lads the game because I made a few mistakes," he said.

"Then we scored and, after 90 minutes' worth of abuse, I expressed my emotions as soon as we scored.

"Next thing I know, I've turned around and all the Serbia players were surrounding me, pushing me and a brawl broke out. I remember getting slapped twice. I got ushered away and that's when I kicked the ball - and then the referee sent me off."

The monkey chants continued while other England players and officials were attacked by some of the Serbia players with punches thrown as they tried to enter the tunnel after the game.

In June 2007, the Serbian FA was fined 16,500 pounds because of racist chants and the behaviour of their fans at another Under-21 match against England while last year UEFA President Michel Platini said Serbia could face a ban if racism there continued.