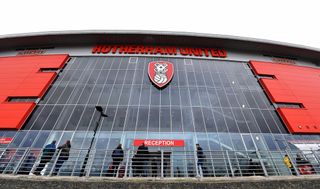 Rotherham have been fined £150,000 and ordered to contribute towards costs after pleading guilty to a breach of fire regulations.

The Sky Bet League One club announced on their official website that they had pleaded guilty in Sheffield Crown Court on Monday to “a single offence under the Regulatory Reform (Fire Safety) Order 2005” in January 2015.

“On a non-match day, the fire alarm sounding led to the evacuation of two functions held in the conference and events suites,” the Millers said.

“There was no fire and nobody was harmed during the evacuation. The incident highlighted issues in the co-ordination of evacuation measures for non-match day events at the stadium between the club and its third party hospitality partner.

“The club was fined £150,000 and agreed to pay a proportion of the Council’s costs for bringing the prosecution.

“The club fully accepts that its procedures at that time in relation to such events were not as robust as they should have been and this is reflected in its guilty plea.

“Following the events of January 2015, the club swiftly launched an internal investigation and, in conjunction with its hospitality partner, took remedial steps to introduce more robust procedures.”

Rotherham are currently top of League One following relegation from the Championship last season.