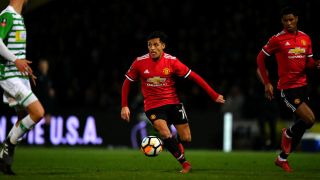 Ander Herrera marvelled at Alexis Sanchez's tireless work-rate after the Chile forward made an impressive Manchester United debut on Friday.

Sanchez laid on two goals as Jose Mourinho's side eased to a 4-0 FA Cup win at Yeovil Town, including a reverse pass for Herrera to thrash in United's second.

However, it was another aspect of the former Arsenal favourite's game that caught the eye of his new team-mate.

Asked for his thoughts on Sanchez's display by MUTV, Herrera said: "Yeah, amazing. He has played very good, but what I really like from him is the way he fights when he loses the ball.

"He is always ready to be the first defender of the team. That's going to be very important for us.

"Of course, we know his quality. He is going to be amazing for us but the way his first, the way he defends I really like it."

Sanchez is in line to make his Premier League debut for United when they travel to face Tottenham at Wembley next Wednesday.