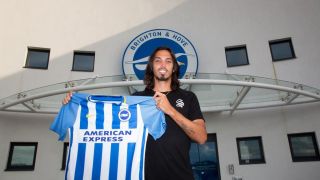 Brighton and Hove Albion have secured the signing of Argentine defender Ezequiel Schelotto from Sporting CP in a deal worth up to €3million.

Schelotto - predominantly a right-back - completed his move to the AMEX Stadium on Thursday, signing a three-year deal with the Seagulls.

Manager Chris Hughton believes the former Inter defender's experience will be key to helping his side maintain their Premier League status.

"We are delighted that Ezequiel is joining us," Hughton told Brighton's official website.

The full story on the arrival of Ezequiel Schelotto at from Sporting Lisbon. August 31, 2017

"He has made nearly 190 appearances in the top flight in Italy and Portugal and has played in the Champions League, and is the type of experienced player we want to add to the squad.

"He can also play as a more attacking wing-back and so gives us some good options in defence."