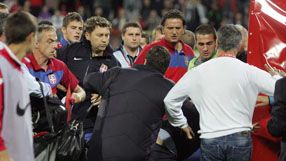 England's Danny Rose said he was racially abused by supporters in the Serbian city of Krusevac during Tuesday's European Under-21 Championship qualifier, which ended in an on-pitch brawl after England won 2-0 on aggregate to reach next year's finals.

"This country hasn't solved the problem of hooliganism at any scale at all and hence some Serbian fans think it's legitimate to voice racist slogans because they think it's no worse than booing or jeering their team's opponents.

"They don't understand the difference, they don't realise the real dangers of racism and we will have to face the consequences as well as learn some very tough lessons."

Television footage from the fixture, which England won 1-0 with the last kick of the game, suggested Rose was the victim of incessant monkey chants by hundreds of Serbian fans who also pelted him and his team mates with missiles as they celebrated the goal.

Rose was sent off after the final whistle amid a melee among players and officials.

The Serbian Football Association (FSS) denied the racism allegations and said in a statement that the home team were provoked by Rose's "inappropriate, unsportsmanlike and vulgar manner towards the supporters".

That changed in the run-up to the bloody Balkan conflicts and the fuse was lit when Red Star's visit to Dinamo in May 1990 resulted in a mass riot which left 60 people seriously injured, some of them stabbed, shot and poisoned by tear gas.

One of the backlashes to Serbia's rapidly declining economy and political problems of the past 20 years was domestic soccer violence, which spiralled out of control with the culprits often getting away with slaps on the wrist if they were punished at all.

French fan Brice Taton died in hospital after he was beaten by Partizan fans before a Europa League match against Toulouse in September 2009, two years after a Red Star fan attacked a policeman with a flare and was later jailed for 10 years after being found guilty of attempted murder.

The landmark verdict, however, did not stop the hooligans from exporting their violence and Serbia had to play a Euro 2012 qualifier behind closed doors after an October 2010 riot in Italy, when their fans hurled flares onto the pitch.

The game in Genoa was abandoned after seven minutes as Serbia fans, who also stormed their own team bus and attacked goalkeeper Vladimir Stojkovic before kick-off, ignored pleas from the players to behave.

Rose, the English players' association and former England captain Paul Ince have called on UEFA to ban Serbia from international competition and appeals for clemen