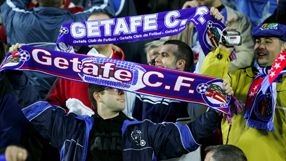 Michel's Sevilla, who had won four of their last five matches to close to within a point of sixth place and the Europa League slots, took the lead at the Coliseum with a stunning strike from Alvaro Negredo in the 19th minute.

Pedros Rios engineered the turnaround, however, having a hand in four of Getafe's five goals, scoring one himself and laying on two for Miku and one for Miguel Torres.

Sevilla slipped down to ninth on 45 points, level with Athletic Bilbao, Atletico Madrid, Espanyol and Getafe who are 11th.

Real Madrid top the standings with 85 points from 33 games, four ahead of Barcelona, who they play at the Nou Camp on Saturday, with five games left this season.

Sevilla looked to be cruising when Spain striker Negredo scored a spectacular overhead kick, but they eased off and Torres volleyed Getafe level from a Rios corner in the 35th.

Medhi Lacen fired Getafe in front from outside the area in the 49th and winger Rios then carved Sevilla apart.

The 30-year-old set up Miku after a mazy run, headed the fourth and played Miku through for the fifth.