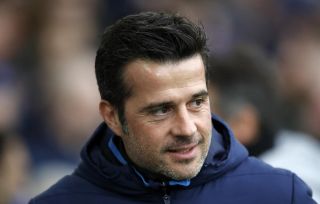 Everton manager Marco Silva believes the improvements made by his side over the past year are “clear” as he looks for ways to take further steps next season.

The Toffees go into their final game of the season, away to Tottenham, in eighth place, the same as their final position last year but with more points on the board, more goals scored and fewer conceded.

“Of course I can see (progress),” Silva said. “Not just when I see the points on the table but also the way we had the tough period in the middle of the season… we reacted. It’s part of the process.

“We have seen improvements, it is clear. We are different and better than last season, not just in points but goals scored, goals conceded…

“All of us, we want more. We want to finish as high as we can, we want more points, but improvements, in my opinion, this is easy to see.”

Silva has indicated he would like to sign the on-loan duo of Kurt Zouma and Andre Gomes permanently – the latter has been linked with Tottenham – and said the summer would be crucial in pushing Everton on to the next level.

“Now is the moment to analyse everything to see what we can improve,” Silva said. “The next market will be important to us.”

Everton conceded 58 goals in the league last year, finishing with a negative goal difference, but they head to north London having cut that number to 44 this campaign, with 14 clean sheets along the way.

“It’s a good number but it’s important to see how we’ve achieved that,” Silva said of the clean sheets. “You can do it with all your players back (defending) but that’s not our style.

“When you can achieve that while playing to win the matches that shows you are more solid as a team.”

One statistic where Everton do not measure up well is away from home against the top six sides, with no wins all season.

Spurs will go into Sunday’s game still celebrating Wednesday’s stunning Champions League comeback to beat Ajax which set up an all-English final against Liverpool in Madrid next month.

Silva is certain there will be no hangover for Mauricio Pochettino’s side, but is clear his own team are not on their holidays yet.

“It’s a good game for us to finish well,” he said. “We want to play well, finish well and do everything to get the three points.

“It’s one of the things we didn’t do this season,” he added of winning away against a top-six side.

“We have put up some good numbers but we didn’t beat one of them away. This is one more opportunity to show our quality and prove we can do this on Sunday.”