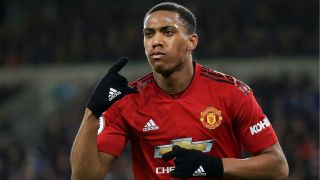 Martial has dazzled since Solskjaer replaced Jose Mourinho in December, with the French forward scoring his 11th goal of the season in Saturday's 3-0 win over Premier League strugglers Fulham.

And Solskjaer agreed as he challenged Martial to reach the heights of five-time Ballon d'Or winner Ronaldo.

"It was towards the end of the game and we played a very poor game and Cristiano scored it," Solskjaer said.

"He [Martial] does have similarities, of course. If he wants to be at Cristiano's level, Anthony knows what he has to do. It is up to him. He has the talent."

Solid match from the team today! Thanks to all of you for the amazing support! 3 Goals, 3 points @ManUtd#MUFCpic.twitter.com/V9fb1fbqvk— Anthony Martial (@AnthonyMartial) February 9, 2019

On Martial's goal, Solskjaer added: "If you look at his goal and his starting position, he is not free of defensive duties.

"He was in the middle of our half when we won the ball and he gets the ball 20 yards further up on our halfway line and he runs with it, so he does the defensive bit.

"He knows he needs to do some defensive work but he has got some quality going forward. He is electric and his balance, his pace, everything about him. When you are a full-back, you don't want him running at you. He knows he has to defend."

Martial was reportedly looking to leave United before Mourinho was sacked but the Red Devils star signed a new five-year deal at the end of January.

"I am glad he is in my team," Solskjaer said. "He has contributed to so many chances, so many goals. He is a Manchester United player. He excites the crowd. He excites the manager. He excites his team-mates. And he is a great character around the place."