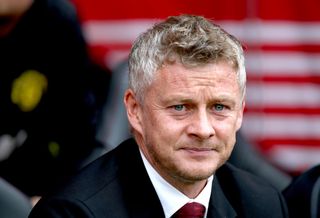 Daniel James’ stunning opener had the visitors dreaming of a first away win since March’s jaw-dropping Champions League triumph at Paris St Germain.

But United endured an eighth successive winless match on the road as a towering Jan Vestergaard header made it 1-1 and Solskjaer’s side failed to capitalise on Kevin Danso’s second-half sending-off.

They had already wasted a number of chances after taking the lead, leaving them heading into the international break with a mere four points.

“We’ve dominated the last three games and know we are on the right track, getting used to that way of playing,” Solskjaer said, with the opening-day thrashing of Chelsea followed by a draw at Wolves and home loss to Crystal Palace.

“In the last three games they haven’t given many points in return, but we’re getting better and better playing this way. It’s a young team that will get used to it.

“But today was a matter of we’ve just got the game where we wanted, we were winning 1-0, that’s when you can get that counter-attacking football, be more clinical, ruthless when we go forward.

“But it wasn’t to be, but we just gave them enough encouragement to stay in the game.

“I don’t know how many shots we’ve had today and in the last game against Palace but it’s a matter of taking the chances and that’s what football is all about, getting it inside the posts.

“But we’ll get there, we’re working on it, and so delighted for Dan with his strike again, he’s had a fantastic impact since he’s come and he can give us quality.”

James was impressive yet again for United, taking his Premier League tally to three goals in four games – as many goals as Alexis Sanchez could manage in 19 miserable months.

“He’s an example for everyone in football,” Solskjaer said of the Wales international. “Had his period on loan, didn’t get games. Now scoring goals and he’s our top scorer and that comes through his personality, his habits.

“He’s humble, works hard, and he knows he can improve, and today he could have scored one or two more and we’ll work with him to get his quality even higher and better and then we’ll have a top, top player.”

Paul Pogba limping out of St Mary’s after twisting his ankle in #MUFC’s draw with #SaintsFCpic.twitter.com/HxIv7GQza5— Simon Peach (@SimonPeach) August 31, 2019

United were without starters Anthony Martial and Luke Shaw through injury while Paul Pogba was seen limping out of the ground after Solskjaer revealed he “got a bad knock on his ankle”.

Despite an underwhelming display, Solskjaer backed the France midfielder to live up to the lofty expectations placed on him and insisted he will not be leaving the club despite continued speculation linking him with Real Madrid.

“I think we as a team after about half an hour started giving sloppy balls away and Paul was one of them,” he said.

“He wasn’t any different to anyone else, we as a team didn’t play well but in the last 20 minutes or half an hour he did create loads for us going forward.

“Everyone expects everything from him every game, he has to defend, he has to attack, he has to win headers, he has to dribble past people, he has to make passes. That’s just Paul and he’ll thrive on that.

“Paul Pogba will be playing for us.”

Meanwhile, Southampton boss Ralph Hasenhuttl was proud of his players’ effort having followed up the wins at Brighton and Fulham in the cup with a hard-earned point.

“Absolutely pleased and very proud of my team – and not only my team but the whole stadium and the crowd and how they pushed us in the end and how they energised us,” he said.

“It was very important after this really tough week with the game on Tuesday, a third game in a week and injuries and the red card, and in the end it was only about the character and mentality and the guys showed a lot of it.

“They deserved to get this point and we are happy.”