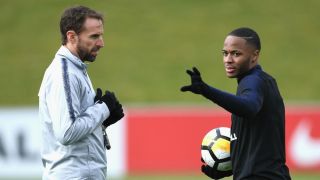 Gareth Southgate has given Raheem Sterling his backing after the England forward made the headlines for having a gun tattoo.

Sterling drew criticism from some media outlets after it was revealed he has the image of an M16 assault rifle inked on his leg, prompting the player to reveal its meaning as a tribute to his father, who was shot dead when the Manchester City player was two years old.

That explanation has not satisfied some critics, but Southgate has defended his player, wishing the public could get to know the 23-year-old and his "lovely sense of humour" better.

"We always have to manage every situation as well as we possibly can, but things only become a distraction if we allow them to," Southgate told a news conference. "Anything that is outside of the camp, we can't control.

"We have to focus on what we do day to day, making sure we prepare as well as we can for the games. The rest has to be noise outside that doesn't distract what we're here to do.

"It's impossible for me to say [if there is an agenda against Sterling]. I don't know how other people think and work. What we've seen this week are the catalogue of stories that have been written.

"I suppose when you're a high-profile young man or woman and you're in the public eye, there's going to be a lot of intrusion at times into your life. That's the world we're in.

Amazing feeling to be named in the squad, for this summers World Cup in Russia!! May 16, 2018

"He's got a lovely sense of humour and, over the last few months, we've talked in more recent England camps about how he's gaining confidence to come and speak in this sort of [news conference] environment.

"He's done that really well and I think people have seen the real person and a bit more of the character that's behind the player. It's important he's been able to get his message and personality across.

"For all of the lads, people judge them on very small experience of them. Nobody really - except your family, close friends and team-mates - knows you that well."

Southgate added that he does not like "codes of conducts" and questioned why this issue had come about on the eve of the World Cup, but he believes Sterling is capable of moving on swiftly.

"I talk to all of the players at length because I think it's important, as a coach, to get to know them and what makes them tick and what they're about as much as possible," he said.

"As an international manager, you don't get as much time to have that personal contact. It's really important to me to understand their motivations, their thoughts and their feelings on things and to feed back to them on how we see them as players and people.

"[Talking to Sterling] was nothing out of the ordinary, but when you've got a player that has been the centre of attention, as has happened this week, it's important to check how they are.

"He completely understood why there might have been a perceived line on it. He knows what he meant and what it means to him. He's comfortable that he's done nothing wrong."