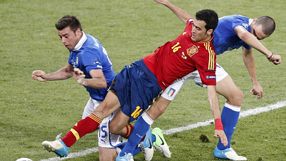 With Carles Puyol and Gerard Pique sidelined by injury, Del Bosque has only one other recognised centre-back in the squad in Raul Albiol but he has barely featured for his club Real Madrid in recent months.

The other option is to use midfielders Sergio Busquets or Javi Martinez who both have experience in central defence, particularly Martinez who mostly played there last season at Athletic Bilbao before reverting to midfield for his new club Bayern Munich.

"It could be there will be players who play a different role from the one at their club and that they play out of their ideal position," Del Bosque told a news conference in Minsk when asked where Busquets might play.

"It will be because we believe they can do the job perfectly well and we won't ask them to do anything that conflicts with their particular characteristics."

Spain won their opening game 1-0 in Georgia, extending their winning streak in European Championship and World Cup qualifiers to 23 matches.

They last failed to win a qualifier in a 1-1 draw with Iceland in Reykjavik in September 2007.

Spain went on to become the first team to win back-to-back European Championships with a World Cup in between and will be firm favourites to retain their global title in Brazil in 2014.

After returning from Belarus, Del Bosque's men host France on Tuesday at Atletico Madrid's Calderon stadium in a match that could go a long way to deciding who wins the group.

It will mark an emotional return for Chelsea striker Fernando Torres, back at his former stomping ground for the first time since leaving Atletico for Liverpool in 2007.

"It's a special place for me and it's the first time I am returning," said Torres.

"Many years have passed since I left and what better way to return, playing in front of our fans for the Spanish national team and against France," added the 28-year-old.