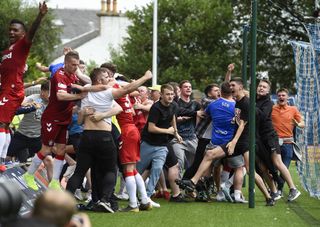 The Scottish Professional Football League say they will work with police and both Kilmarnock and Rangers to determine what action is needed following a pitch invasion at Rugby Park.

One man was injured as the roof of a disabled shelter collapsed when Rangers fans spilled out of the stand to celebrate Connor Goldson’s stoppage-time winner.

Television footage appeared to showed three supporters climbing on the roof while a number of fans ran on to the pitch and track-side to celebrate with Goldson and his team-mates after the defender had sealed a 2-1 Ladbrokes Premiership win on Sunday.

Footage on social media showed police, stewards and fans trying to hold up the disabled shelter roof while fans in wheelchairs got out from underneath.

A spokesman for the SPFL said: “The scenes at the end of the game at Rugby Park were simply unacceptable.

“The passion and energy of Scottish fans is a huge asset to the game, but nobody wants to see them invading the pitch – their place is in the stands.

“We will be working with Police Scotland and both clubs to investigate the incidents at the game, including turnstile and ticketing arrangements and will be studying CCTV footage to see what additional actions are required.”

Kilmarnock director Phyllis McLeish told STV: “We were horrified at what we saw. We already had our team in to start our internal investigation.

“We have reached out to Rangers to hopefully work together to ensure the safety of both sets of fans for the next time they come and to learn some lessons.”

Other footage has emerged apparently showing Rangers supporters opening a gate to enter the stadium amid delays to get in the ground.

Witnesses reported Rangers fans being crushed trying to get into Rugby Park.

Absolute disgrace getting into Rugby Park, 45 minutes to get through turnstiles, kids getting crushed and police losing control. Credit to the fans for restraint. pic.twitter.com/aw1Poya2Dv— Dave Rangers (@rangers_dave) August 4, 2019

The away end was only approximately three-quarters full at kick-off but, by the dramatic conclusion of the game, Rangers fans could be seen sitting and standing on the stadium’s stairs and entrances to the stand.

McLeish added: “There was already two-thirds of the away side in but I think this was just impatience and there was a 60-second breach that was dealt with fairly quickly.

“The fans have breached through a manned ticket gate. There weren’t any injuries – it was dealt with very quickly and brought back under control.

“There was heavy searching being conducted and unfortunately that did lead to some delays. Fans need to be aware of this for the season.”

Police Scotland launched an investigation into the “pitch incursion” on Sunday.

A spokeswoman said: “The incident resulted in the roof of a shelter collapsing and one man being injured.

“He received medical treatment at the ground and our enquiries are ongoing.

“Four men were arrested in connection with breaching the peace.”