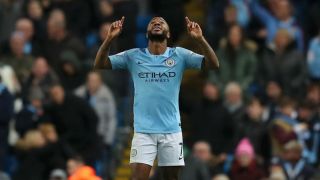 Manchester City attacker Raheem Sterling believes his team can claim an important win over Liverpool if they are at their best.

Pep Guardiola's side needs a victory at the Etihad Stadium on Thursday to close the gap to Premier League leaders Liverpool to four points.

Despite two defeats in their past three games, Sterling is confident in City's chances against his former club.

"If we can play the way we know we can play, we can beat anyone," he told UK newspapers.

"It's going to be a great game and we're all looking forward to it."

What a year it has been! pic.twitter.com/kd1GRMkwD7— Manchester City (@ManCity) January 1, 2019

Manchester City fell behind in the title race after suffering shock defeats to Crystal Palace and Leicester City.

However, they rebounded by beating Southampton 3-1 on Sunday and Sterling talked up the importance of that result.

"It's a massive step and just what we needed," he said.

"We had two poor games and we knew we needed to win to give ourselves a chance and we did just that. Our previous two results were difficult to take and I thought we bounced back brilliantly.

"I think we owed it to ourselves and as a team to bring that level we know we can bring."