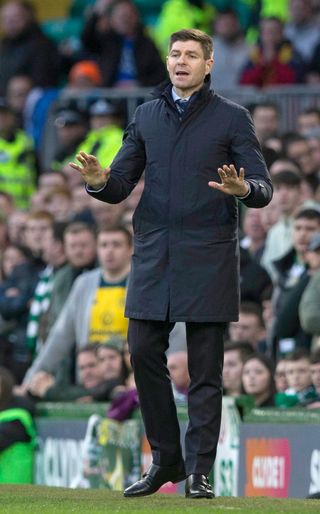 The Hoops midfielder was punished for a grab at Gers striker Alfredo Morelos in the Blues’ 2-1 win at Parkhead at the end of December.

Christie escaped with only a free-kick against him but he was subsequently charged with violent conduct by the Scottish Football Association and a fast-track tribunal found him guilty with the ban triggering an extra one-match suspension because it is the Scotland international’s second red-card offence of the season.

Celtic later issued a statement accusing the Scottish Football Association of a “worrying lack of consistency.”

Speaking at the club’s training complex in Dubai, and after being awarded the Ladbrokes Premiership manager of the month award for December, Gerrard told Sky Sports: “I think the Ryan Christie situation is for Neil Lennon to talk about and Celtic to deal with.

“In terms of the consistency across the board, referees, getting cited, I think all managers are going to ask for consistency, especially when they are on the wrong side of it.

“Prior to that we have had decisions that have gone our way, a cup final went against us because of a decision.

“We never got a penalty up at Aberdeen, look you can cry wolf, you can get the violin out if you want but the reality is you have to get on with it.

“Whatever comes our way, positive or negative we will try to deal with it and move on.”

Gerrard has mixed feelings about the implementation of VAR as a problem solver.

The former Liverpool and England captain, who in terms of January transfer activity revealed  “three or four will probably go out but there won’t be much activity in terms of incomings”, said: “I think it would (help) in certain situations.

“We have seen it down in England, the mixed side of VAR, positive in a certain way but also maybe ruining that natural aspect of the game, of opinion.

“I think for certain things we have to have it.

“I am not a fan of VAR changing the game in terms of being stop/start and slowing the game down and ruining celebrations and the natural side of the game we all love.

“But I think the vital decisions, the big decisions, that can change the outcome of the game across the board, I think it certainly has to be discussed.”

Gerrard picked up the manager of the month award for the second time this season, after his September success.

Rangers won five league matches and drew one in December, with four of the games being away from home and with the win at Parkhead taking them to within two points of Celtic at the top of the table with a game in hand.