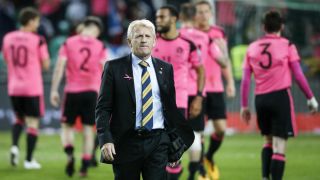 Gordon Strachan claims "genetics" are preventing Scotland from competing at the top level after his side spurned a chance to reach the World Cup play-offs.

Needing three points to secure second spot in Group F, Strachan's men could only manage a 2-2 draw in Slovenia having led 1-0 at half-time.

Roman Bezjak netted from a pair of second half set-pieces to put the hosts ahead, before Robert Snodgrass scored what proved to be a late consolation.

And Strachan believes an inherent physical disadvantage is hindering Scotland's ability to match their rivals.

"What I do know is that, genetically, we're behind," the former Celtic boss said in his post-match press conference.

"In the last campaign we were the second smallest, apart from Spain. That means we had to pick a team tonight to try to combat [Slovenia's] height and strength.

"We knew set plays would be a problem and they scored from two set plays. We can't change genetics."

"It's hard to put into words."Hear from goalscorer Leigh Griffiths following tonight's 2-2 draw with Slovenia. October 8, 2017

While he received the backing of captain Darren Fletcher and star striker Leigh Griffiths, Strachan refused to be drawn on his future with the national team.

"I'm the last person to be thinking about right now," he said.

"The players, staff, fans, family - you want to make sure they're alright."