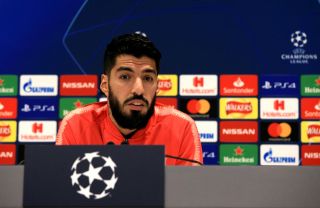 Luis Suarez admits he owes a debt of gratitude to Liverpool for helping him become the player he is and believes a warm welcome awaits at Anfield for the service he put in for the club.

The Barcelona striker scored 82 goals in 133 matches over the duration of his three-and-a-half-year stay on Merseyside, where he was loved by Reds fans and generally detested by all opposition supporters.

Much of that was of his own making, having been banned for eight matches after being found guilty of racially abusing Manchester United’s Patrice Evra and then 10 matches for biting Chelsea defender Branislav Ivanovic.

Suarez bit the hand that used to feed him after scoring the opening goal in the Champions League semi-final first-leg 3-0 win at the Nou Camp last week but he believes the reception he will receive on his return will be positive.

He has vowed not to celebrate, unlike last week, out of respect should he score in front of the Kop.

“Obviously it is special after enjoying a number of good years here and I am grateful to Liverpool for my time here and how they received me as player,” said the Uruguay international.

“I will always be thankful for that and the heritage of the club. It is going to be very special to come back here this time wearing a different shirt but I have lovely memories of my time here and my career at Liverpool.

“It helped me in so many ways, it helped me become more technical. When I came from Ajax I did improve but having players with great experience allowed me to be even better.

“Being captain of Liverpool was one of the proudest moments of my career. It is something I won’t forget. Playing in the elite with Barcelona was because of Liverpool and what they made me.”

Suarez is convinced fans will remember his record at Liverpool and respect him accordingly.

Suarez was, somewhat harshly, criticised for celebrating wildly when he scored the opening goal last week.

He will not be repeating those scenes should he find the net at Anfield.

“Celebrating the goal last week, people who know about football, who love this sport, know about the importance of this,” he said.

“I have all the respect in the world for the Liverpool fans. Because I scored and celebrated with my fans, I say sorry.

“Obviously it is clear that if I score a goal against Liverpool I won’t celebrate it in the same way.”

Despite a significant advantage, coach Ernesto Valverde insists they will not underestimate their opponents and will stick to their principles.

“It is going to be difficult. We have to be aware of the atmosphere here. We know the fans are going to be behind their side from the start.

“Every team has their own style and it’s always important to bring the game to your side.

“If a team puts you under pressure and tries to get you to play the way they want to play, that can put us in an uncomfortable situation.

“We want to have the feeling that we are in control. There is no doubt they will attack us, no doubt about that. We have to stop the pressure and stop them attacking us.”