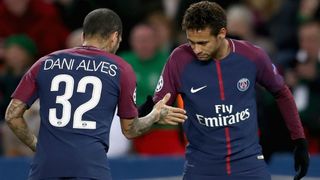 Paris Saint-Germain could achieve the rare feat of finishing the Champions League group stage with a 100 per cent record on Tuesday.

But in Bayern Munich they will come up against a fearsome foe eager for revenge after their 3-0 dismantling in Paris at the end of September, a defeat which ultimately cost Carlo Ancelotti his job.

Manchester United are expected to secure their progression at home to CSKA Moscow, while Premier League rivals Chelsea can join them.

Barcelona have already sealed their spot in the next round, but Luis Suarez will be out to end an alarming goal drought in Europe. Paulo Dybala finds himself in a similar boat for a Juve side that needs a win to make absolutely sure of progression alongside Ernesto Valverde's men.

Below, we examine the key Opta numbers behind Tuesday's clashes.

0 - Benfica, like Anderlecht and Feyenoord, have no points after losing all five of their Group A games so far. Even if they do beat Basel, this will be their worst Champions League campaign ever.

16 - Unlike Benfica, Basel can still reach the last 16. They will progress if they better CSKA Moscow's result or if both of them lose or draw, as they have a superior head-to-head record. But if those two both win, the top two shall be decided in a three-way head-to-head with Manchester United.

1 - Jose Mourinho's United will secure top spot with one point against their visitors, while CSKA will qualify if they better Basel's result in Lisbon. For the Premier League side, it will be the first time they have played in the knockout phase since 2013-14.

2 - CSKA will do well to leave Old Trafford with all three points, as they have only lost two of their last 48 Champions League group matches at home (Besiktas in 2009, Cluj in 2012).

6 - PSG travel to Munich hoping to secure a sixth win from six in this year's group stage, a feat managed only six times before.

5 - Neymar is the only player - other than Cristiano Ronaldo - to have scored on every matchday in the Champions League this term. He has also netted in each of his last three games against Bayern in the competition.

0 - Celtic have not won any of their last six home games in the Champions League (one draw, five defeats), their worst run in the competition at Parkhead.

17 - Both Celtic and Anderlecht have conceded 17 goals in this year's competition, more than any other team.

3 - Roma will guarantee their place in the last 16 with all three points, though a draw could also be enough if Atletico Madrid fail to defeat Chelsea. Qarabag are already out.

3 - Qarabag have had a player sent off in each of their last three Champions League games, a feat only previously managed by Bordeaux (2000) and Juventus (2001).

4 - Atletico, who need to win to have a chance of progression, have not won any of their last four matches on the road in Europe - that is their worst run under Diego Simeone.

5 - If they are to leave Stamford Bridge with a positive result, they will need to keep Eden Hazard under wraps. The Belgian has been involved in five goals (two assists, three goals) in the competition.

11 - This is the 11th consecutive season that Barcelona have finished top of their Champions League group, the longest streak in the competition's history.

716 - Luis Suarez has not scored in the last 716 minutes of Champions League action, his longest drought in the competition.

25 - Paulo Dybala has had 25 shots and failed to score any of them, the worst record of all players in the competition this season.

7 - Massimiliano Allegri has never failed to get beyond the group stage of the Champions League in his seven attempts as a coach, with his Juventus side needing to at least equal Sporting's result in order to extend that record.

An epic night in Athens awaits with everything on the line. December 3, 2017