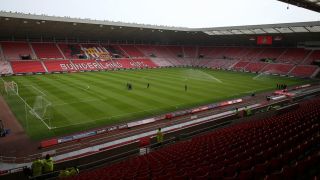 Sunderland will host Derby County in their first match back in the Championship after 10 years in the top flight.

The managerless Black Cats finished bottom of the Premier League last season under David Moyes and will seek an instant return in 2017-18, kicking off the EFL campaign with a home clash against the Rams on Friday August 4.

The Tigers appointed Leonid Slutsky after Marco Silva took over at Watford, while Boro hired Garry Monk following his departure from Leeds United.

Beaten play-off finalists Reading start with a visit to QPR and Bolton Wanderers' return to the second tier is marked with a home match against Leeds on August 6.

Sheffield Wednesday and Sheffield United will renew their rivalry at Hillsborough on September 23, with the return clash taking place in January.

League One's first set of fixtures sees promoted Portsmouth at home to Rochdale, while Blackburn Rovers will begin life in the third tier at Southend United.

Forest Green Rovers' first game in the Football League is at home to Barnet, while Coventry City's return to the basement division for the first time in 58 years starts with the visit of Notts County.