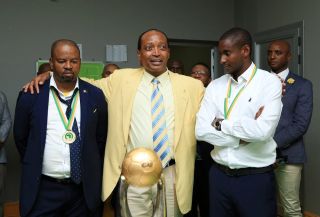 The pair will lead the Brazilians during the 2020-21 campaign as co-coaches following the recent departure of Pitso Mosimane, who joined the Egyptian Premier League side Al Ahy.

The Brazilians have since released the following statement on Sunday afternoon:

'Mamelodi Sundowns will in due course make other important announcements.'

'Manqoba and Rhulani have been with Mamelodi Sundowns for many years and were part of the Technical Team that were crowned Champions of Africa in 2016 and have also won the Premier Soccer League and other titles in South Africa.

'The board of Mamelodi Sundowns was particularly keen to appoint South African coaches and express its commitment and confidence in the talent and ability of our local coaches. Manqoba, Rhulani and the Technical Team at Sundowns will focus on defending the PSL and the other titles that we won during our historic 50-year anniversary.

'They will also advance and continue with the objective that we stated in 2004, which is to make Mamelodi Sundowns one of the best clubs on the African Continent.'