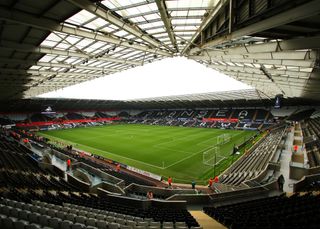 Wales were regular visitors to Swansea during the 1970s and 1980s with games played at the old Vetch Field.

Swansea’s new Liberty Stadium home staged its first Wales fixture in 2005, but has not hosted the national team since 2013.

The 1964 British Home Championship match against Northern Ireland on April 15 was probably the most famous Wales game to be played at the Vetch for one reason.

George Best was still a month away from his 18th birthday when he made his international debut in a 3-2 victory for Northern Ireland.

Ron Davies and Brian Godfrey were on target for Wales, while Martin Harvey, Samuel Wilson and James McLaughlin scored for Northern Ireland.

But Best was already making a name for himself at Manchester United and everyone turned up to see him play.

1⃣4⃣ years since we said goodbye to our former home…— Swansea City AFC (@SwansOfficial) May 11, 2019

Wales were in the hunt for a place at the 1982 World Cup finals in Spain after winning their opening four group games.

But then the floodlights failed during Iceland’s visit to the Vetch on October 14, 1981.

Wales were leading 1-0 when the lights went out, and after play eventually resumed Iceland came back to draw 2-2 and dash Welsh qualification hopes.

Czechoslovakia took the second qualifying spot from Wales on goal difference. The Vetch Field finally closed for business in 2005.

After a Vetch farewell in 1988, Wales made a low-key return to Swansea in 2005 and 2006 with goalless friendly draws against Slovenia and Bulgaria.

The Liberty Stadium did not prove a happy hunting ground until Switzerland were beaten 2-0 in a Euro 2012 qualifier on October 7, 2011.

Aaron Ramsey and Gareth Bale were the scorers on a night that hinted at the potential of a squad that would eventually reach the semi-finals of Euro 2016.

Alas, it was manager Gary Speed’s penultimate match on home soil as the former Leeds, Newcastle and Everton midfielder died the following month.

Chris Coleman’s side had beaten Scotland home and away, but defeats to Belgium, Serbia and Croatia had left them out of the qualification reckoning.

Wales gave a good account of themselves against star-studded opposition and led through Bale’s first-half penalty.

But Croatia – inspired by a midfield masterclass from Real Madrid’s Luka Modric levelled through Dejan Lovren before Eduardo struck the winner three minutes from time.